Huawei Mate 20 or Huawei Mate 20 Pro? That’s one very reasonable dilemma, but you don’t have much of a choice, do you? If you are lucky to live in one of the few markets where both phones are available, then you can save some cash by getting the regular Mate 20. But it is one peculiar trade-off with some odd gains and losses. Let’s find out if that’s a deal worth making.

The Mate 20 is indeed the oddball in this duo. It has a lot in common with the Pro, but it also changes some of the key aspect of the phablet. The screen is bigger with a tiny droplet notch, but an LCD one with lower resolution and without and curves. The body is not water-resistant but has an audio jack and a proper bottom speaker. And the main camera while still triple, is completely different.

The Mate 20 lacks the new 40W SuperCharge and is stripped of all wireless charging capabilities, but it still can do 22.5W SuperCharge. It also loses the advanced face unlock, and the under-display fingerprint scanner, but gets the fan-favorite blazing-fast reader on the back. 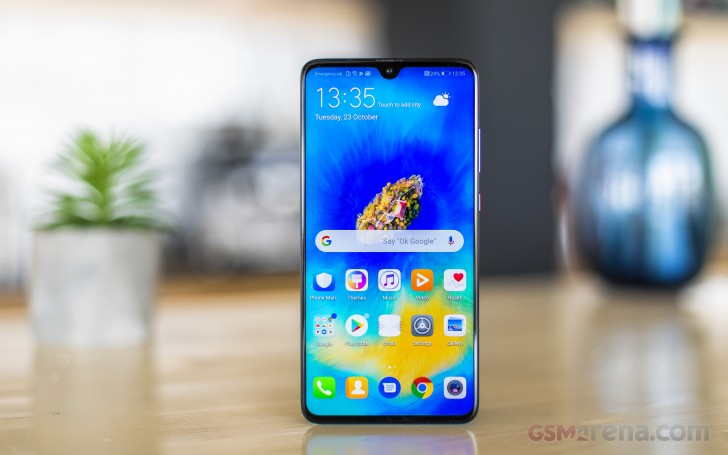 The main camera is the feature to raise the biggest concerns. It’s still a triple one, but with different sensors, lenses, and there is no optical stabilization to be found. The Night Mode is present though, so the Mate 20 is keeping its cool under low-light.

Huawei Mate 20, just like the Pro, has a hybrid SIM slot that supports only the new Nano Memory Cards by Huawei. We are still looking to get one of those, but here is hoping Huawei broadens their availability soon enough.

There is a lot to talk about the Mate 20, so let’s start by popping this thing out of the box, shall we?

The Huawei Mate 20 runs Android 9 Pie under its thoroughly custom EMUI launcher, v9.0 in this instance. The Android purists are guaranteed not to like this combo, but Huawei has been working on its custom skins for years and nobody should have expected vanilla Android anyway. 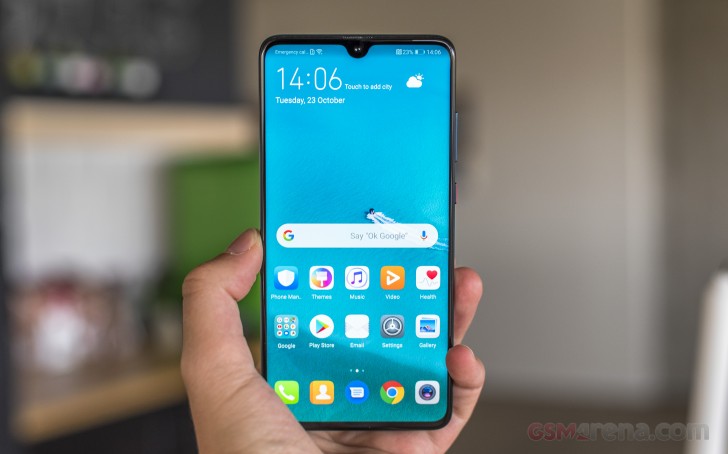 Huawei has cleaned up the general interface and the settings panel has been simplified by hiding rarely used settings under “advanced” sub-menus in more categories. Huawei’s built-in apps are getting updated navigation menus along the bottom of the screen to make them easier to reach.

You get a better Huawei Share too, which can share files with a PC and print documents wirelessly.

A travel assistant by HiVision and in-house developed Digital balance app that tell you how much time you are spending on your phone and give you the option to limit yourself (the screen will go monochrome after the time is up) are in the package.

But in spite of all the novelties and newer Android version, the EMUI looks familiar so upgraders should feel right at home.

The Mate 20 doesn’t have the fancy under-display fingerprint reader, nor it employs 3D face scanning tech. Being a cheaper device, the Mate 20 enjoys a regular fingerprint sensor on its back, always-on and very fast and accurate as usual.

Face Unlock is available, but it’s just uses the front camera, which means it’s less secure and can potentially be fooled by a picture. So, if privacy is of utmost importance, you may want to avoid this option.

You can either embrace the notch, or you can opt to mask it with a black status bar that extends all the way down to the bottom edge of the notch. The Mate 20 has one of the smallest notches around, so we’d imagine few people would choose to hide it.

Huawei has pretty also implemented its version of iPhone’s gesture navigation – swipe up for Home, swipe up and stop midway for Task switcher, or swipe from the left or right edge of the screen for Back. Well, the iPhone does Back only from the left edge, so that’s an upgrade, right?